“The Best Connection is proud to be one of the largest employers of EU nationals in the UK and we fully embrace our diverse, inclusive workforce. With the turmoil and uncertainty that Brexit has created, the Home Office is working with employers, such as The Best Connection, to help with sharing essential information over the course of the exit process. To assist with this, we have received helpful guidance from the Home Office which, along with our own initiatives, has assisted us with developing an ongoing communications programme that has been well received by our EU national workforce and our clients,” - Neil Yorke, Director. 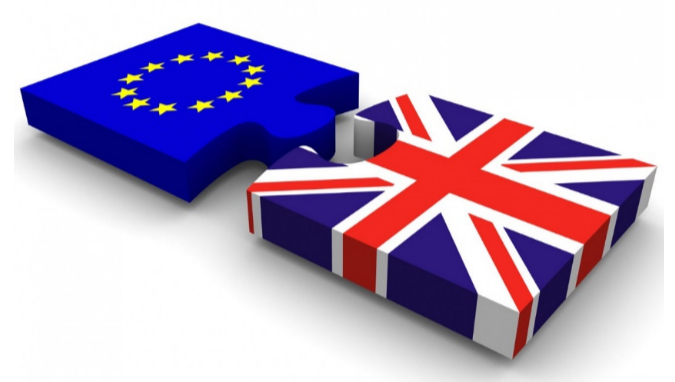 To assist with the development of the Brexit communications programme, Roxanne Sweeney has joined Alex Dirman to form the TBC Brexit Communications team. Both have completed various research projects which have led to developing close contact with the Home Office and the CBI (Confederation of British Industry). The team are working alongside various departments within the business in order to communicate essential information on Brexit to internal and external recipients, including colleagues, temporary workers and clients.

EU immigration has continued to decrease

Non-EU immigration has remained broadly stable over the past year

Non-EU net migration has gradually increased over the past five years, with 232,000 more non-EU citizens arriving than leaving in the year ending December 2018, this was similar to levels seen in 2011.

*Note: The above statistics are sourced from the official ONS web site and are estimated 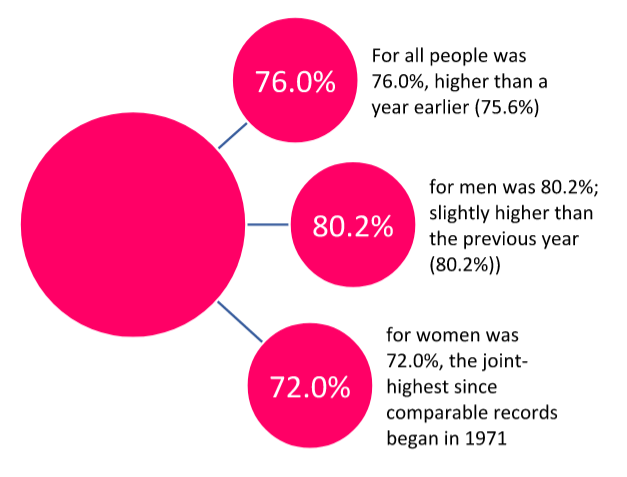 Estimated employment rates for men and women aged between 16 and 64 years have generally been increasing since early 2012.

The increase in the employment rate for women in recent years is partly due to changes to the State Pension age for women, resulting in fewer women retiring between the ages of 60 and 65 years. 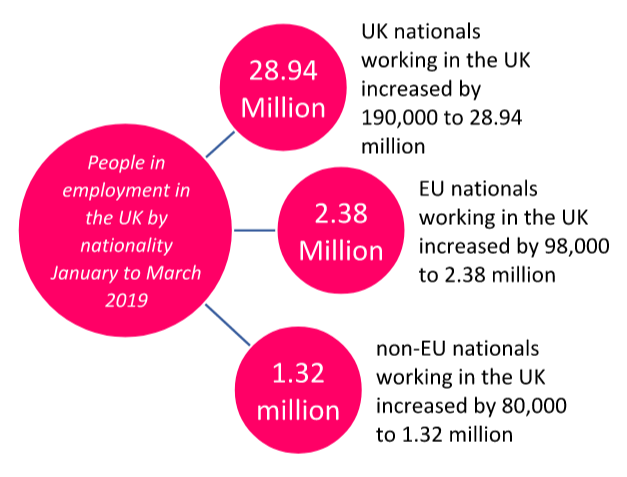 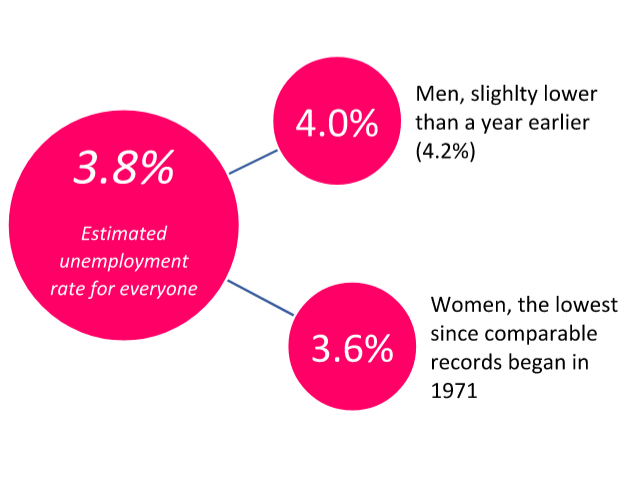 UK unemployment rate is estimated at 3.8%. This is the lowest level since October to December 1974.

Estimated unemployment rates for both men and women aged 16 years and over have generally been falling since late 2013.

By working together, we can ensure that all EU nationals working in the UK receive up to date, relevant information to assist them throughout the Brexit process. To assist with this goal, The Best Connection is delighted to have formed a valuable alliance with the Home Office and were recently invited to a meeting in London.

Alex Dirman, TBC Brexit Champion and Mike Cooper, Director, met with the EU Exit Communications team to discuss what the Home Office could do to support The Best Connection over the coming months. It was agreed that following the session the Home Office would provide crucial statistical data to supplement TBC’s Brexit Update communications initiatives. 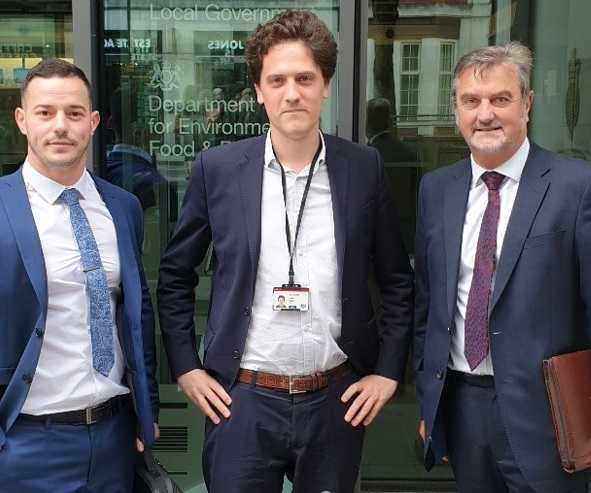 “The Home Office was impressed with the work The Best Connection is undertaking to engage with its workers and its clients on Brexit and has agreed to validate and endorse our future Brexit communications.

“Our initial meeting was a resounding success and marks the beginning of a long-term, direct relationship with the Home Office,” says Mike Cooper, Director.

The Home Office EU Settlement Scheme has been designed to provide EU citizens and their families who currently reside in the UK with a route to living and working in the UK beyond 30 June 2021 (Deal scenario) or 31 December 2020 (No Deal scenario). This will give them a status in UK law, once the UK leaves the EU. 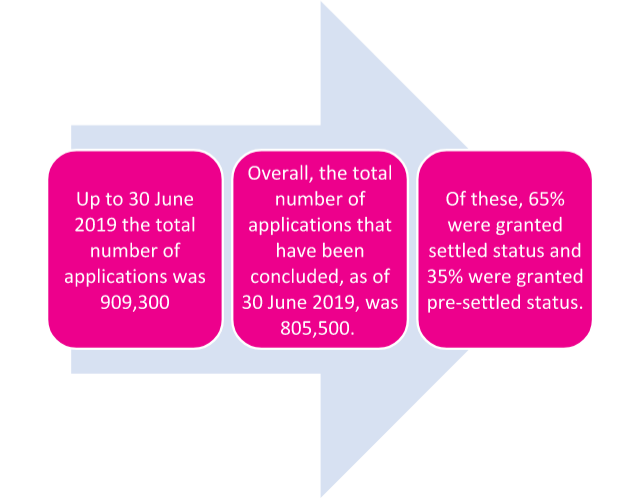 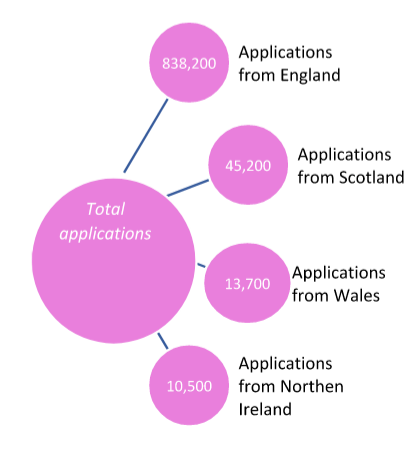 Leaving the EU will end free movement and ensure full control of the UK border. A new, single immigration system has been designed based on skills and talent. 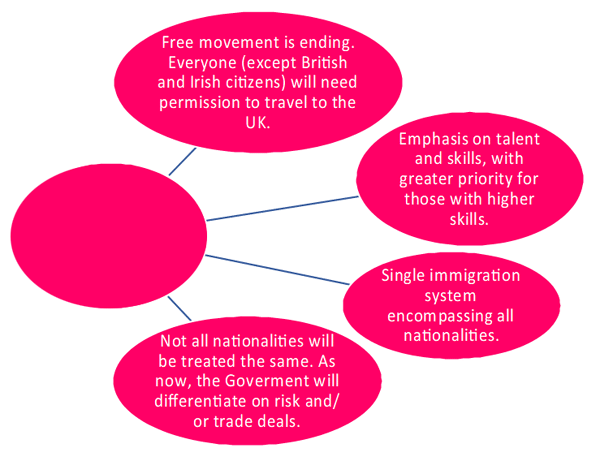 The UK Government is planning to streamline and digitise the immigration system to improve customer service. This will also facilitate better identification of those who seek to abuse or exploit the system.

Every migrant will have an individual immigration status – from the moment they apply for permission to travel to the UK, digitally ‘stamped’ as they cross the border, checked by employers and public service providers to establish rights to work and access services and benefits in the UK and digitally ‘stamped’ again when leaving the UK. 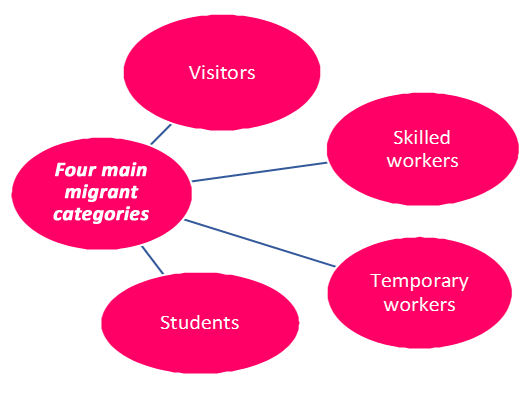 All visitors will continue to be able to come to the UK for six months. 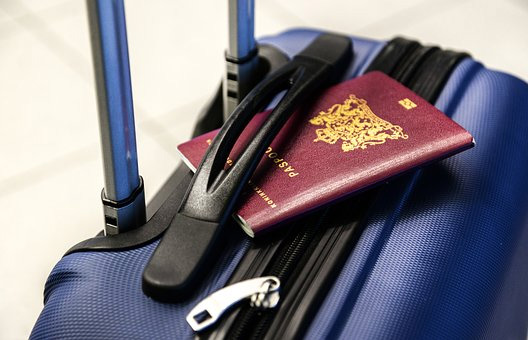 EU citizens will be non-visa nationals, meaning they can come to the UK as visitors without the need to obtain a prior visa.

EU citizens will continue to be able to use e-gates and the UK Government have announced that they are extending eligibility to Australia, Canada, Japan, New Zealand, Singapore, South Korea and USA.

The UK Government will introduce Electronic Travel Authorisations (ETAs, similar to US ESTA), subject to legislation, to improve the flow of security checks and facilitate the travel of legitimate passengers.

The UK Government stated that they will discuss with stakeholders whether the existing rules for visitors need to be simplified or extended.

There will be a new route for skilled workers.

In line with the recommendation of the Migration Advisory Committee (MAC), the UK Government is widening the skilled route to encompass those at medium skill level – any job above RQF 3 (essentially, A-level and above).

For this group, there will be no cap on numbers or a requirement to undertake a resident labour market test, however, there will be a minimum salary threshold.

The UK Government will engage with businesses and employers on the appropriate level for the salary threshold.

The skilled route will be a sponsored route, i.e., the migrant will be linked to an employer.

The UK Government will create a Temporary Worker route, as a transitional measure.

This is an important safety valve for the economy. It gives businesses and employers time to adapt – to further invest in the skills of UK workers and in productivity.

This new route, accessible to those of any skill level for a maximum of 12-months, will only be available to nationals of specified countries, e.g., those low-risk countries with whom the UK negotiates an agreement concerning the supply of labour. It will include a 12-month cooling-off period.

This will be an unsponsored and uncapped route. People coming under this route will have no rights to access public funds, settle or bring dependants.

Operation of this route will be kept under review and be fully reviewed in 2025.

In line with MAC’s advice, the UK Government are not planning to put in place sectoral schemes, other than possibly for agriculture. The UK Government launched a two-year Seasonal Workers pilot earlier this year.

There will continue to be no limit on the numbers of genuine international students wanting to study in the UK.

There will be a single system for international students of all nationalities.

The UK Government will test academic ability, funds and English language, but do so as sensitively as possible.

The UK Government are going further than MAC has recommended by giving undergraduates at institutions with degree-awarding powers a six-month extension.

Distribution of EU migrants in the UK 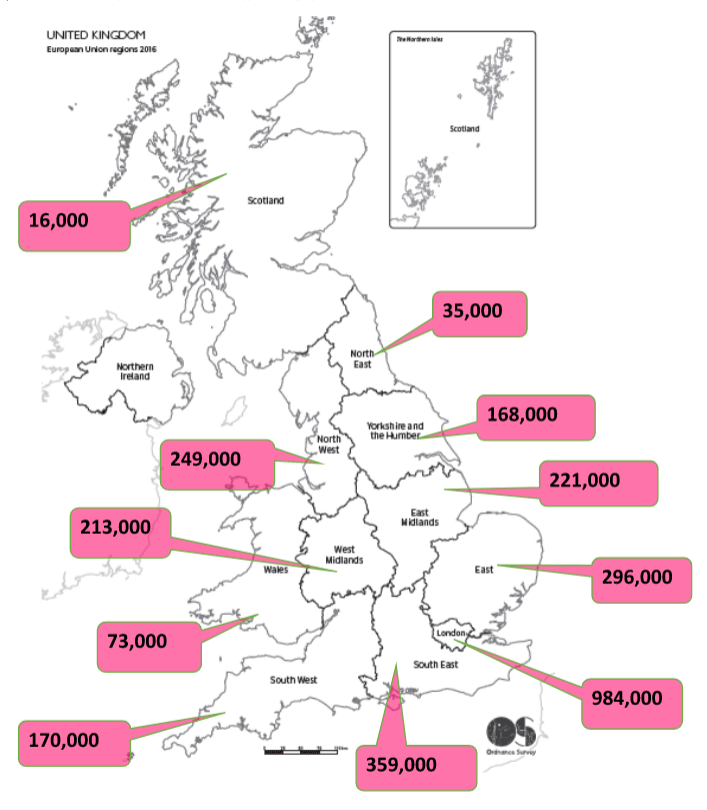 Research conducted in 2018 by the University of Birmingham, found that at the time of the Brexit referendum, EU-born UK residents, accounted for approximately 5% of the UK population and comprised between 0.7% and 25.8% of the resident population in local areas, with geographical distribution concentrated around London, the South East, and the East. 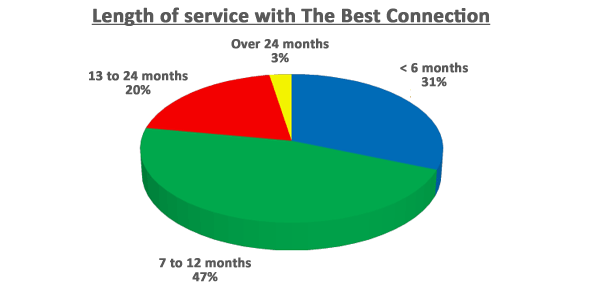 In considering the proposed Immigration Policy post Brexit, The Best Connection has recently reviewed the length of service of all temporary workers currently in its employment. Figures show 69% of current temporary workers have been with the company for longer than seven months. 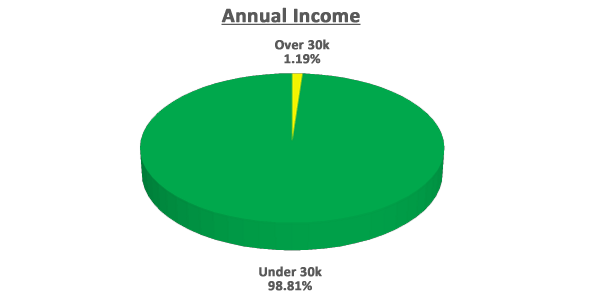 Based on the classifications outlined in the Immigration ‘White Paper’, just over 1% of the temporary workforce may be considered as ‘Skilled Workers’.

In a recent survey of TBC’s EU nationals employee base,* 69% of respondents revealed that they have not applied for the EU Settlement Scheme with the majority citing a lack of understanding of the process (50%) and a belief that Brexit will not happen (38%) as the two main reasons. Only 31% have applied since the scheme’s launch in March 2019 with 12% saying they would be leaving the UK. 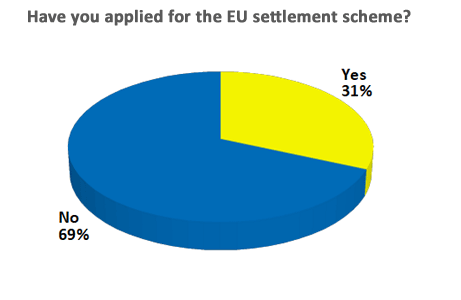 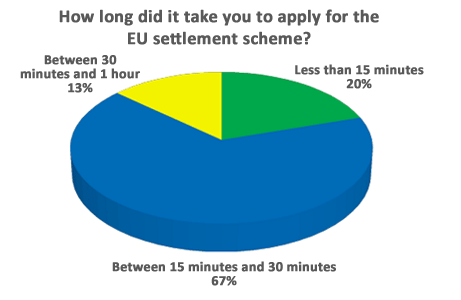 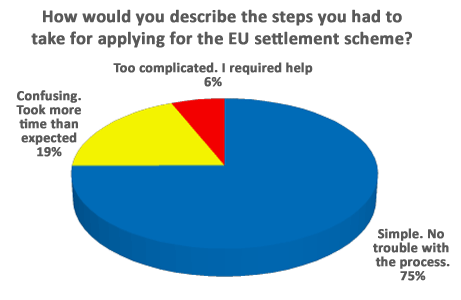 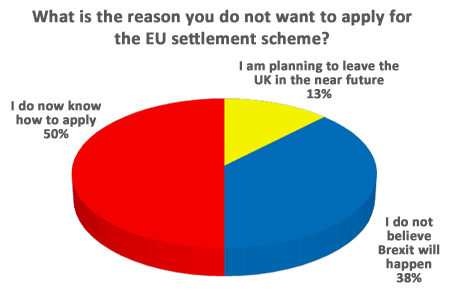 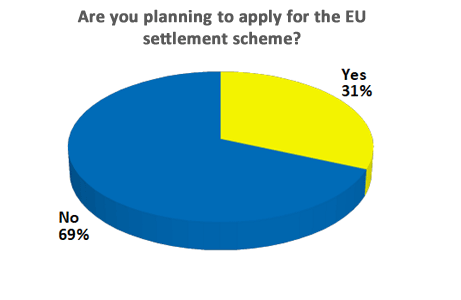 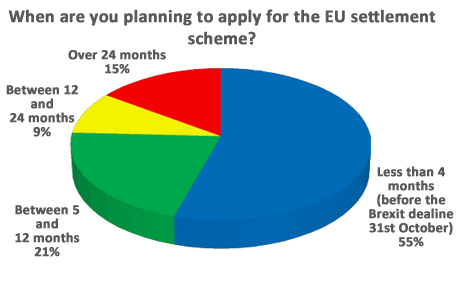